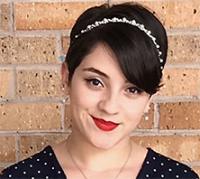 The story of faculty ex-girlfriends unexpectedly reunited at a snow-covered airport unfolds on stage on the Stay Theater Workshop this weekend in Steven Dietz’s romantic comedy “Taking pictures Star.”

Working from Thursday to September 3, the drama tells the story of Elena Carson and Reed McAllister. Elena and Reid dated in faculty however went their separate methods. They meet once more of their late 40s when they’re caught on the airport with nowhere to go.

Elena, performed by Shanna Brock, remains to be single and has lived as much as her hippie values. In the meantime, Reid, performed by Stephen Frankfield, “has grow to be company and conservative” and is in an sad marriage. The enjoyable and “bittersweet” drama, directed by Samantha Cormier, unfolds in ways in which neither the characters — nor the viewers — count on.

Bianca Morales is the Cultural Expression and Neighborhood Values ​​reporter for TucsonSentinel.com, and a report for America Corps members supported by readers such as you.